How far do we go to repair and detail your interior? As far as it takes! If your interior needs custom attention, we can entirely remove the interior of the car, pressure wash where applicable, restore and repair fabrics and even replace carpeting when needed. We’ve even gutted cars completely to ensure that every aspect is truly cleaned.

It can take a lot of work to remove tough odors. Often times air fresheners or over the counter options will try to mask the odor with a stronger smell. When extra care is needed, we flush the vehicle with ozone, which oxidizes odor molecules. By changing their molecular structure, the odor is completely removed, not just masked.

Ozone (O3) is three atoms of oxygen, and is often used to sterilize bacteria, viruses and in this case strong odors. People often associate the smell of fresh air with thunderstorms because the ozone that was naturally created during the storm has eliminated many other smells and odors. Molecules of odors attach to the third oxygen atom (a process called oxidization) and thusly have been fundamentally changed at the molecular level. The remaining two oxygen atoms are simply the breathable oxygen we think of as being in the air around us.

When properly executed, ozone treatments combined with physical cleaning can completely remove odors. The smell will not come back because we have eliminated the source.

Whether it’s mold, mildew, smoke, pets, or some goodies left behind by the kids, we have your car smelling fresh and clean again. Come by today for a free estimate!

We’ll go as far as it takes 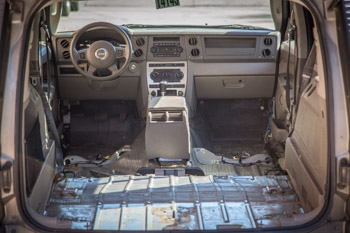